FLAG: The Lebanese flag is divided into three wide horizontal stripes, with red on the top and bottom and a wider white stripe in the middle. In the center of the white stripe is a green cedar tree, the emblem of the country. 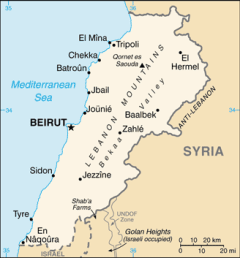 ECONOMY: Lebanon capitalizes on the initiative of its people and its geographical location to make up for a lack of natural resources. Traditionally, a substantial percentage of the country's income derives from remittances sent by the millions of Lebanese residing overseas. A service-based economy, its trading,banking, and financial facilities, as well as its free currency market, made Lebanon the region's commercial and tourist center before the war. With peace established and reconstruction underway, Lebanon is once again serving as the commercial and tourism capital in the area.

About 38% of the country is under cultivation, with wheat, vegetables, fruit, tobacco, and olives the main crop categories. There is considerable livestock farming as well. Industry ranges from cement to textiles,clothing, furniture, canned goods, and light metals. Tourism, one of the mainstays of the pre-war economy,is being revived.

To help strengthen the economy, the government has initiated a low income tax schedule to provide investment incentives, increase disposable income, and expand the tax base.

CURRECY AND BANKING: Movement of currency into and out of the country and all exchange transactions are completely free of any kind of control. Gold and silver coins may be freely exchanged, imported, and exported. The official monetary unit is the Lebanese pound issued in LL50, LL100, LL250, LL500, LL1,000, LL5,000, LL10,000, LL20,000, LL50,000, and LL100,000 denominations.Banking is a major industry in Lebanon with strict banking secrecy one of its important features. More than 80 banks operate in the country, and transactions are performed efficiently and at low cost.

GOVERNMENT: Lebanon is democratic republic with a parliamentary system of government and a cabinet headed by a prime minister. Its constitution is based on the separation of executive, legislative, and judicial power, with a president elected for a six-year term. The 128 members of parliament are elected by universal adult suffrage for a four-year term.

EDUCATION: There is a nationwide network of elementary and secondary public schools, which is supplemented by many private schools. Instruction is given in at least two languages. The general educational spirit of Lebanon looks outwards, both to the East and West. Many Lebanese students pursue higher education in Europe, the United States, and Arab countries. Today, Lebanon has seven major universities and numerous specialized colleges and schools:

Information from Ministry of Tourism